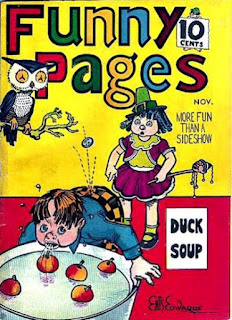 Brooklyn Reading Works presents
Funny Pages
A Night of Humor
Curated by Marian Fontana
At the Old Stone House
Author Marian Fontana knows funny and she is bringing together a great group of comic writers for this night of hilarity with Don Cummings, Blair Fell, Ellen Ferguson, Billy Frolick, Gianna Messina & Marian
.
BIOS OF THE PERFORMERS:
DON CUMMINGS' critically acclaimed plays have been produced on both coasts: His play, The Fat of the Land was a semifinalist for the Kaufman & Hart Award for new American comedy. A Good Smoke was a semifinalist for the Eugene O'Neill theater conference. It had a reading at The Public Theater in  starring Meryl Streep and Debra Monk and has been optioned for Broadway. Piss Play is about Minorities so it's Really Important was produced in the Summer Cringe Festival of 2009 where it received the Golden Pineapple award for best play. His latest play, Live Work Space, opens soon in . His collection of nonfiction essays are loosely held together in his yet-to-be-published memoir, Open Trench, named after his blog. He has acted in a lot of plays and been on a lot of sitcoms and writes movies and TV shows. Mr. Cummings is a graduate of , The Neighborhood Playhouse and a member of The Dramatists Guild and the Ensemble Studio Theater Writer's Unit.   www.doncummings.net
I WILL BE READING  "The Front Row"---a story about choosing the wrong best friends out of convenience.


BLAIR FELL has written for the television series Queer As Folk, and the emmy-award winning Public Television show California Connected. His plays Naked Will, The Tragic and Horrible Life of the Singing Nun, From The Hip, Bargains and Blood, The Ballad of Little Girl Jesus et al have been performed around the world and have received numerous
awards.  He has written charity and award show speeches for hundreds of celebrities, as well as the GLAAD Awards, Vimeo Awards and The Trevor Project.  Along with writing for a number of pop culture websites, he writes a fiction blog called subwaysaints.com and the web series Burninghabits.com. His work can also be seen on blairfell.com.

ELLEN FERGUSON writes the "Diversity in the News" column for McSweeney's, and her nonfiction has also been published in Diversity Prep, Publisher's Weekly, and SPY.  Her McSweeney's column has been widely reprinted online.  Her poetry can be found online on identitytheory and the Brooklyn Reading Works, and in print in Long Island Quarterly.  Before she started teaching English, Satire and Nonfiction in and , she worked at The New Yorker Magazine and SPY.

MARIAN FONTANA has been a writer and performer for over 20 years. Her articles have appeared in The New Yorker, Vanity Fair and most recently in the Guardian and on  Salon.com. Her memoir, A Widows Walk published in 2005 by Simon and Schuster, was chosen as the Top Ten Great Reads of 2005 by People magazine and the Post's Book Raves of 2005. She most recently completedher second memoir, The Middle of the Bed.   Her essays have appeared in the anthologies Money Changes Everything and The Time of My Life for Random House. She is currently collaborating on a musical.

BILLY FROLICK'S screenwriting credits include DreamWorks Animation's .  He has written for The New Yorker, The Los Angeles Times and Salon.com, and is the author of four book-length parodies, including The Ditches of Edison County, a national bestseller.

GIANNA MESSINA is a writer, producer and comedian who got her start as a baby model. Her work has appeared in  Dossier and Atlanta Style & Design magazine. She has performed stand-up at the Punchline in and at the Metropolitan Room in and co-hosted the No Rules radio show with comedian Stu Levine. She is a graduate of Syracuse University Crouse College of Art and the High School for the Performing Arts where she majored in Drama. Gianna lives with her cat Clementine in in order to be closer to good bread and cannoli. She is gluten-free intolerant, enjoys the 3rdperson format of biographies and blogging on giannamessina.com.


EXPERIENCE Brooklyn Reading Works, the reading series that has been called "The best place to chase fiction with a bit of history" by Conde Nast Traveler.  "Once a month you can hear writers discuss themes ranging from "Make Mine a Double" - on women and  drinking -  to books by war veterans."
BRW is a great night out for anyone who wants to be entertained and enlightened by acclaimed and emerging authors, and meet others who enjoy the same.
A $5 donation includes refreshments and wine.
The Old Stone House
336
Between Fifth and Fourth Avenues
Park Slope,
Due to construction in the park, enter from the side of the house.
Posted by Don Cummings at 10:33 PM

next time one of these happens, invite me up. Mother/Judith