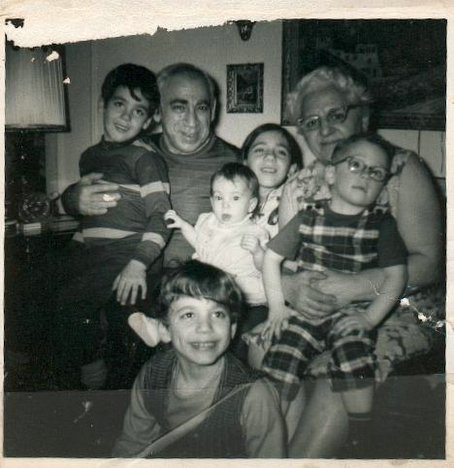 Nanny and Poppa lived in Yonkers. (Antoinette DeFranza and Salvatore Porcello)
Antoinette, also known as Netty, was the first born child of Italian immigrants from Ariano Irpino, about an hour outside of Naples. DeFranza means from France. Apparently, the DeFranzas were French Huguenots who fled during the 1600’s. Great Grandma DeFranza was a Protestant when she arrived in this country, living in Newark, New Jersey. Since all the other Italians went to Catholic church, she dropped her Protestantism and became Catholic. Salvatore was born in Sicily and came to the United States by boat in 1904 when he was two years old. He worked in a carpet factory and a boat factory. Severe asthma plagued him for most of his life.

Nanny was an amazing Italian cook. I was her favorite grandchild. We traveled to Italy together in 1979, when I was 17. On an American Express bus tour. While visiting Assisi, we happened to run into friends of mine from high school, Megan and others, who were on a school trip.

The two youngest children are my cousins, Scott and Christina. Today, Scott sells cars. Christina is a hairdresser in Florida.
Posted by Don Cummings at 12:37 AM

I love this family tree. This is so interesting and that is amazing that you ran into Megan in Italy! And that your great-grandmother was still Protestant. That goes all the way back to FRANCE hundreds of years ago. Amazing.

The way I remember it, and my memory is really sketchy, but Donald and his grandmother started in the South and our hs trip started in the north. Assisi is sort of in the middle. Our tour came into the cathedrale and were circling the alter, something like clockwise, and Donald's tour was circling the alter something like counterclockwise. We met right in the middle. Donald - am I just a fool for imaginary coincidences?

Huguenots fleeing to papist Italy? Things must have been pretty bad in France - or the DeFranza's had a bad sense of direction.

Megan
The altar part is right.

But Nanny and I were going:
Milan, Venice, Florence, Rome

And you guys were doing the opposite.

And there's your Grandma and Grandpa - and there you are. Its great to see this photo.

After this weekend - and hearing this story of you and Megan running into each other in Assisi, I start to wonder about coincidences.

My grandmother, Carmella Defranza was from Ariano, as was my grandfather Angelo Mainiero. Angelo came to the states in 1916. Any linkage anywhere?

Hello,
Yes, I am related to the DeFranzas and the Mainieros from Ariano. In fact, we visited Ariano 18 months ago and met third and fourth cousins. I would be happy to find our exact linkage if you would like to contact me directly. Send me an address at don@doncummings.net