Mary and Dan and I had a huge garage sale on Saturday to raise money for The New Theatre. It was ridiculous. In a great way. Adam, my Recognized-by-the-State-of-California-Domestic-Partner and John, Mary’s husband, and Bradford, our great friend, were all there plying their incredible talents.

Thank you to everyone who donated all that stuff they no longer needed:
John and Frances and Marcia and Dan and Leslie and Bart and Susie and Mary Walsh and Adam and Maggie and Gary and Dan’s big family and Trish and all the other people who donated that I haven’t yet heard about from Dan and Mary.

Some call it landfill. I call it cash. A photo tour: 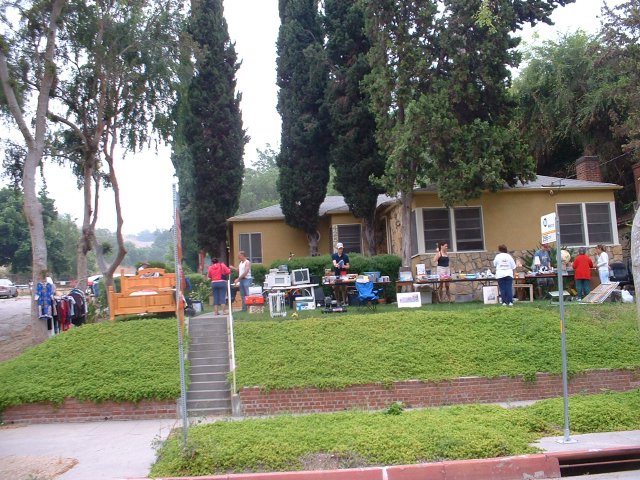 The street view in Monterey Hills at Mary’s house. You may very well recognize some of your wonderful garbage up on that hill.

I’ve moved Bart’s bed at least four times (Oregon, Valley Village, to my house, to Monterey Hills). I say, if you move someone’s bed that many times, you eventually get to sell it in a garage sale. It fetched $90. After it was sold, but continued to lay there on that hill until it was picked up, people were salivating over it. Man. The joke is, during the final move of this bed from our house to Mary’s, the headboard broke. We rested the curvy part against the wheel well in the pickup and laid the mattress on top. The pressure did it in. After that piece broke off, I simply wood-glued it back on. And, there it is. 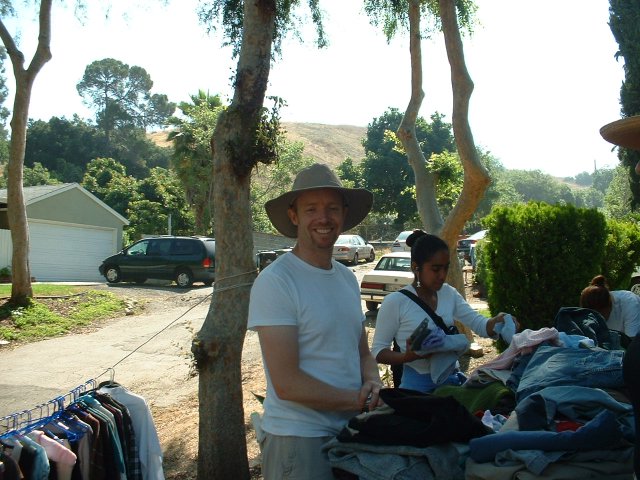 Adam used to work in retail at Boston University to pay for his clubbing at 80’s Fenway clubs. He put his talents to great use. He was the haberdashery department. I’ve never before seen him make so many latin ladies so happy. And can he fold! He gets a lot of practice at home. I think he’s really cute in that hat. 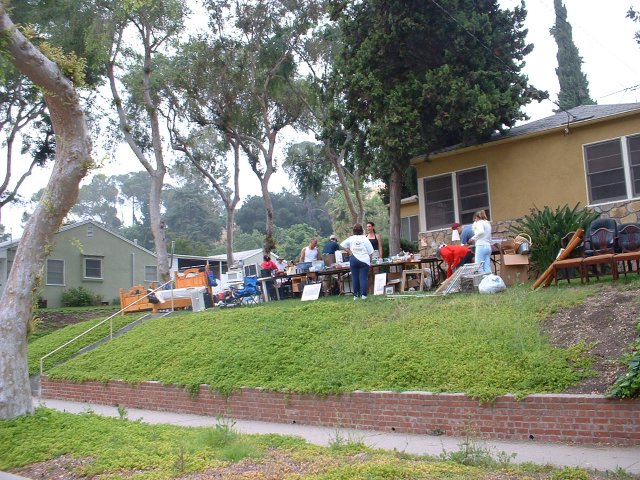 Look at Mary up on that hill (in black) cheerily selling to a customer. Far right, you can see all the dining room chairs and office chairs that were donated to us by Frances, Mary’s sister. They were sold in a frenzy. 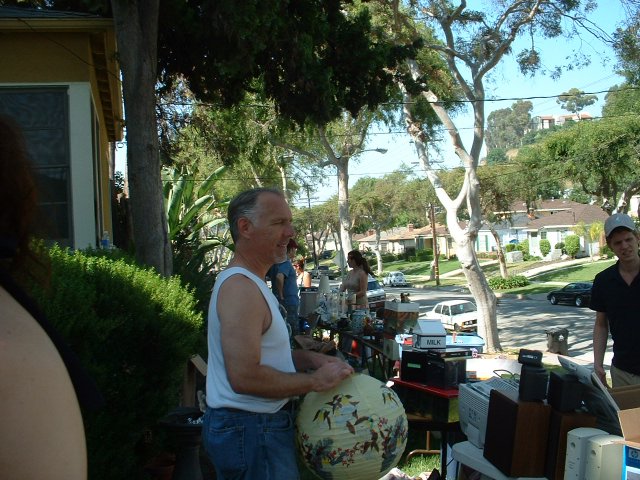 Our great friend, John, who also happens to be Mary’s husband, is a natural salesman. He could sell ice to Eskimos. Oh, wait, that comparison may not hold up any longer, poor waterlogged Eskimos. John was amazing. He really knows the value of things and he could read people very well. He moved the most product. An expert. Every time I would ask, "What happened to the--" The answer was, "John just sold it." 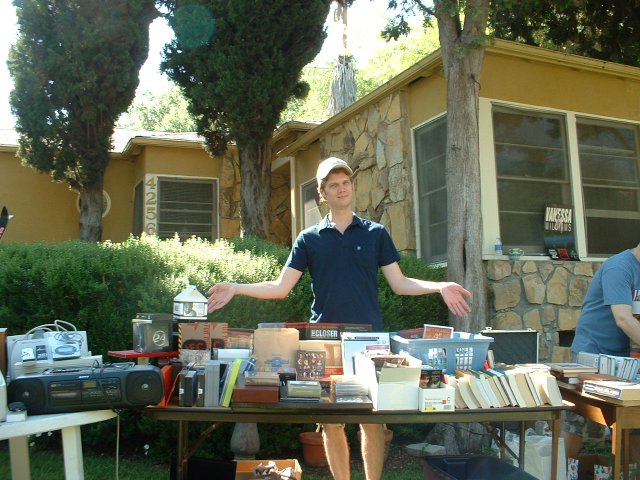 Bardford is a genius in merchandising. He runs a garage sale every year at his house. A great boy from Wisconsin, he is loved by everyone. And look at what he did with those Academy screeners donated to us by Marcia. At first, we sold the big collections for about ten or fifteen bucks a box. Later on, they went for about two dollars. By the end of the day, well, read on.

While Mary Walsh was hiking to the top of Mt. Baldy, we sold her old television stand. This was another hot item. Furniture is a must at these things. 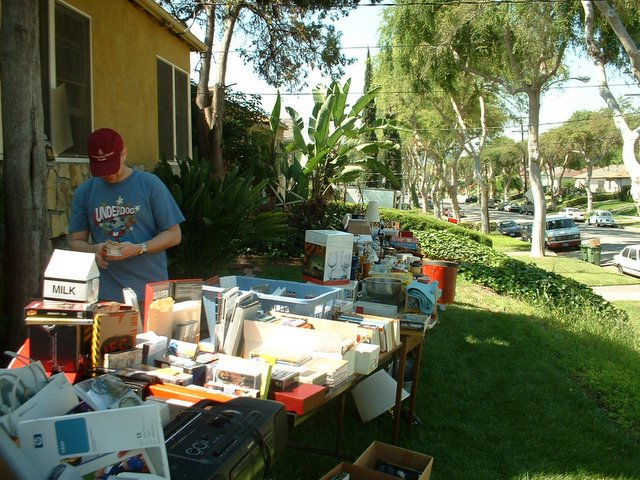 Look at Dan count the money. At the end of the day, we sat there at Mary’s kitchen table all sweaty and I said, “Look at us. A greedy Armenian and a greedy Wop.” And Dan responded, “Acting like Jews. I know that’s what you want to say.” And I said, “Well, sure.” But what I was really thinking was that there is nothing more disgusting yet somehow life affirming than watching people of Mediterranean descent counting money. 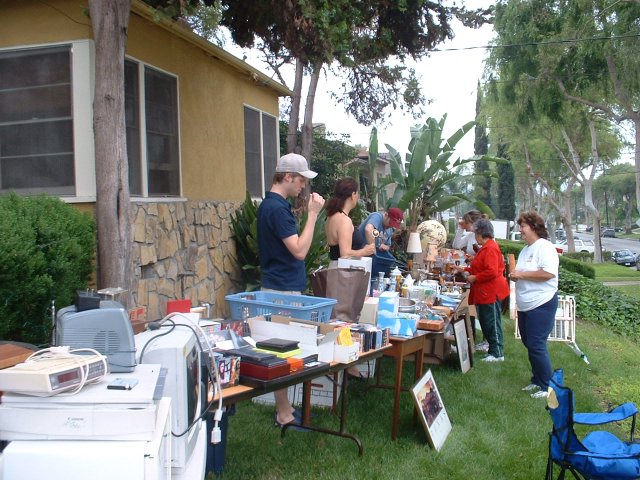 See that little gray box on the left. That’s Margot’s camping television. Somewhat bought it, we brought it inside to plug it in to show that it worked. It didn’t. Margot wins for donating the most broken and stained crap. We joked about her all day long.

My two favorite things that happened that day (besides counting out $1,612.00):

1) During the morning rush, a very lovely woman with a medium Mexican accent finished buying the knock-off Louis Vuitton bag and she was a bit flustered by the ten bucks or so that she spent and I said, “That bag is brand new. It was my mother’s. It's never been used. You got a great deal.”

And she responded with the bag on her shoulder, twisting her kittenish self in my direction to show it off, her eyes all lit up like the beautiful woman that she was, “And it’s just my style, too!” I almost cried.

2) By 2PM the sale was dead. It was very hot outside, some sort of soccer was on television and what we faced was the island of misfit garage sale junk. Like an angel, a sweet man in a pickup arrived and he started pawing at the leftover Academy screeners and bought a few at rock bottom prices. He was about to leave, yet I saw that he was still interested. I cut him a deal, “You can have the rest of the stuff on that table for forty bucks.” He bit. He cleared off the entire table of DVD’s, CD’s and books (and my complete Elton John set of four tape cassettes). After we boxed those up, I tried to push the brand new Epson printer with three new ink cartridges on him (which I hawked all day with no success) for twenty-five bucks. He wasn’t so interested. I then said, “You can have everything on the electronics table for forty bucks.” He cleared off that table.
Then, we had two tables left, you know, of plates, candle holders, what-have-you’s. He was happy to have cleared off two tables. I looked at him and he looked at me and we both knew where this was going. I said, “Forty bucks for the other two tables.” He said, “Thirty.” I said, “Thirty-five.” Sold. Mary and Bradford and Dan and I wrapped those breakables up in no time at all, like we had all been working at the Fulton Street fish market for years. He hauled away our leftovers for $100.00
The sale was over. (Well, once Adam got the final woman out of the clothing department: A drunkard talking about her innocent son in the pokey, "He's innocent.")

I learned from John: People need to feel like what they are buying is of value, that it will enhance their lives. This value must exist in a monetary way, yes, but also in a humanistic way.

I learned this from Bradford: Display and location of items is everything. Make it so people see it. And, as soon as you start moving something, people want it. Objects in motion catch the eye. As soon as I moved the art work to the main area, it was snatched up. As soon as the dinner napkins were nicely folded into a wooden holder, GOODBYE.

I learned about Adam: The Bitch can move used Schmatas. If he ever gets out of television, there’s a job for him on Seventh Avenue.

After the magic angel drove off with $100.00 worth of garage sale leftovers, and Dan and I counted out the money like diamond dealers, Adam and I brought the remaining clothes to Out-of-the-Closet. And then, we all spent the afternoon swimming in Mary’s and John’s aqua-marine pool.
Posted by Don Cummings at 1:42 AM

Great photo tour. I'm glad it was a success!

What a great read! This looks like so much fun!! I never knew Adam worked retail. Or maybe I forgot. Boy the Bart-Bed was a steal at $90. I don't care if it was broken.

Don:
Congrats. For the money and for the great pictures. By the way I can't take complete credit for the black leather(ette) chairs: they came from Tom's office. Everything else I'll claim.