My parents were visiting and the subject of my playing Oliver in the Eighth Grade came up. My father, ever the nostalgic Irishman said, "You had the voice of an angel. Whatever happened to that tape of you that I had? I bet you took it."

Of course, I did take it. My brother taped the dress rehearsal with my cheap little cassette recorder and this tape is among my things hidden in the file cabinets in the back of our guest shack. I thought, "I'm going to make a CD for my father for Father's Day."

I have this at-home-recording-studio (M-Box with ProTools) and it's pretty easy to use. You input the analogue plugs from your source into the M-Box. The M-Box digitizes the source material into the music software, ProTools. You then tweak it and bounce it from there into iTunes in a wave format and from iTunes, you burn it to CD. I had to get adaptors so the RCA plugs of the cassette deck (the red and white ones you see at the back of your stereo spaghetti mess) would fit into the microphone inputs in the back of the M-Box. What would we do without Radioshack? I actually used a series of two adaptors...but I ultimately realized I only needed one. The M-Box inputs actually take a variety of plugs. Then, I spent a couple of hours figuring out how to pay for and download and utilize the MP3 Option for the Protools software so I could make an MP3 file. But the website was under maintenance and was very slow and annoying to use. And finally, the download was just some coding with instructions to reload your original software with a certain box checked and then the code was to be entered at the bouncing point. It went on and on.

I realized, late in the game, that I didn't need the MP3 option for the CD I was making for my father. The free Wave option is what you want for the CD Burning format and I had that. But having the MP3 option is good for other things, like, you know, for making MP3's, which, of course, don't play on CD Players. It's the Tower of Babel out there. All the different plugs, formats, machines. I don't know how these recording artists do this. But, I was able to figure it out. And I have a CD ready for my father. And I posted the song.

It's actually fabulous and sort of sweet. I was thirteen. I was very little. I had a thin, soprano voice. And an amazing Cindi Lauper New York accent. Girls loved me. Boys called me faggot. I wore very heavy eye makeup in this production, I guess because that's what orphans did in those days. I smoked cigarettes and pot and loved Led Zeppelin and the soundtrack of Jesus Christ Superstar. The girl behind me is Dara, who was my girlfriend. We're still close. The doctor taking my pulse is Vinny Stanzione. He now lives at the Jersey shore and my brother is still friends with him. The guy in the white wig is the character Mr. Brownlow. He was the rich man who saved me from a life of thieving with The Artful Dodger. This was all just a wee thirty years ago. 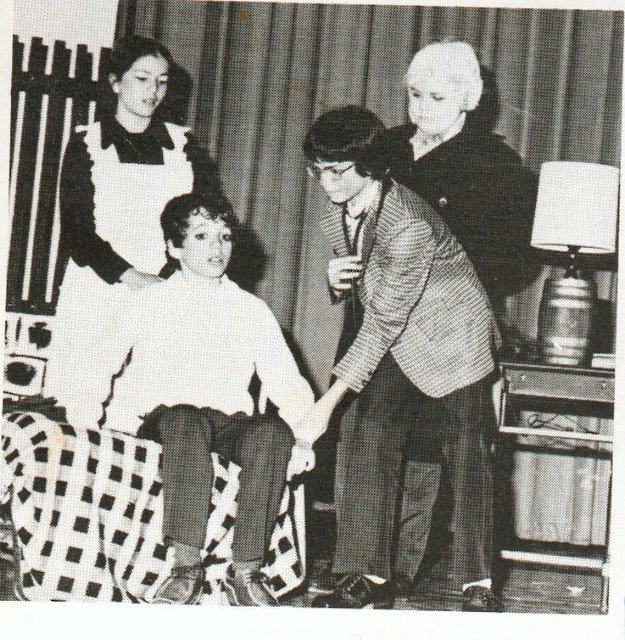