When I was a kid I was mostly alone. It wasn’t because I was ugly or anything. It was because I was shy (truly), bookish (fun), into music (alone), did not like getting hurt (not brave) and I was generally afraid of things. I landed in a coma when I was four (truly) and I think I became afraid of the outdoors because of that. I was stung by a bee and there was no way to know I was allergic before the experience and I went into shock. I recovered, obviously. (I am no longer allergic to bee stings.) But I have this hunch that I was traumatized---this thing happened, I had no control over it, I almost died, I was at a violently impressionable age, and well there it is. Of course, deciding the root of undesirable behavior (my fear of the outdoors and tendency toward aloneness) is caused by some trauma could be a bunch of cod wollop, but in my case it feels like truthy cod wollop. And my father, who is not prone to mythologies did say to me recently, “You weren’t the same after the bee sting.”

But I got over it. But not for a long time and because of that I had a strong relationship with self protection and aloneness.

I remember taking extreme mental note-memories of times when I was completely alone---sitting by the Ramapo River in the woods by a muddy bank at a place where a bunch of us used to sit and smoke, but the group had broken up and no one was friends the way they used to be so I was there, alone, remembering it, wishing it would come back, but it did not.

Or sitting on a leather chair in the clubhouse at our place in the Poconos and my parents were talking with some so-and-so and I was bored but I was also excited because there was a fire going. The fire held my attention. It was very natural. I wanted to remember it.

Then there is this that struck me. I remember walking home from elementary school. I would always walk to school with my brother and the neighbor across the street, always. It took about ten minutes. But on the way home I would often walk alone. I do not remember why, but it might have had something to do with, “School’s out, I’m outta here,” for the others, not so much for me. I remember hating walking home because that was the time when other kids would like to bully you. I was not extensively bullied, but others were and I kind of knew I was next.

About five houses from the school was a standard issue development house with railroad ties to hold up the soil. The ties made terraces and it was well planted. Lots of things that we never had. And I used to stop there, alone, and while other kids were passing by, I would stand there and just stare at the plants and the oak tree and the acorns and the coleus and the junipers and the flowers, all of it. I was a bit put off by the railroad ties, thinking it would be so much better if they were something else, but they weren’t so I came to accept them. But it was the plants that I loved. They were alive. I was alive. They knew it (?) and I knew it and we were so happy together. The kids would walk by and maybe they thought I was weird standing there, alone, staring, but for some reason I knew what I was doing was about the best thing you could do. Somehow, I knew it was powerful and brave to take the chance to enjoy nature, even coiffed suburban nature. And because of that, I knew no one would touch me. And they didn’t. I did not feel less alone. I did feel thrilled by the plants. So maybe that gave me some connection. I knew it was the essence of living.

Today, I walked through Astoria to get some exercise. Here is a lovely flowering ornamental fruit tree. The spirit is lifted so high. 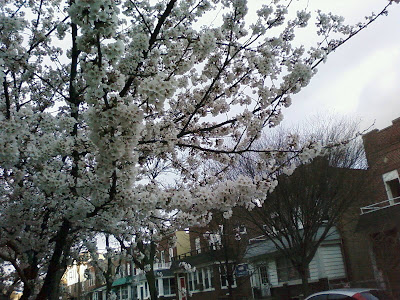