She comes to town, my oldest friend from childhood, Megan. We were lab partners in Biology in the tenth grade hacking up fetal pigs. Now we're both gay. Could there be a connection?

She comes to town to "check out" LA. She thinks that mabye she wants to move here. But after our big greasy dinner at Shik Do Rak with the fabulous dinner club, slathered with hilarity by the food comic, Dan, telling us stories about an Austrian bread fetishist, it appears that Megan loves this town, these people, the smoking meat and so, she has to move here. Great.

Next day, we meet a realtor off a sheet of paper, one of those flyers that says Take One in the Lucite holder in front of a little bungalow in Echo Park that is for sale. Within one day, David, the gay realtor, has my friend, Megan, pre-qualed, and we're off and running looking at properties.

The amazing things to check out in LA for about 400? Here goes: A falling down shack in Glassel Park. The cute but shacky bungalow in Echo Park. The hysterical poverty horror above Riverside Drive, across from the entrance to the 2, where we literally scramble up the hill and have to climb a short manmade ladder to get to the next level of a terraced property that could only be described as Asian squalor on a filthy hill covered with dirty boxes of building material that almost resemble a house, with a small child inside watching a large screen television and all around are rags and buckets, smelling like decay, dogs, and utter despair. We climb back down the ladder to the sounds of the roar of the 2 and 5 interchange and go up to the Northwestern side of Mt. Washington. Finally, there is the house:

The Tillie House. On one of those amazing walk/stair streets called Tillie, up on the side of the hill of Mount Washington. Like something out of Montmartre. With a huge view. And a great flat pad. And this charming street that is not a street at all. And it's called Tillie.

On the way home, Megan decides she has to have it. That night, she is wildly spinning in the back yard while I roast the meat on the grill. She's on the cell phone every ten minutes with her girl-love back in New York. Vaginas are swirling. And I'm the one who has to paddle. I turn to the brilliant Jeffrey (he's here because it's pot night, plus, he's our pal, plus, he missed the dinner club) and I say, "There's going to be some drama this weekend."

And he answers, "You think so?"

We go back the next day to the Tillie house with Adam, my husband, who has a very sober eye when it comes to real estate. He takes one look at the Tillie house and he decides, rightly so, that this house is a no-go. Two corners of the house are right on the property line. That really is annoying. Plus, the main windows of the living area look right into the neighbor's backyard. Bad house placement on an otherwise fun, tree-house lot. We nix Tillie and leave.

We go to the movies. Salad of Jack and Rose. See yesterday's blog. Yikes.

The next day, open houses. After a horrendous shed on Venice Boulevard in a neighborhood best left to Pit Bulls, a squalor shed in way Southern "Echo Park", best left to Pit Bulls, a gorgeous 1910 Craftsman up in Montecito Heights (You must get to Montecito Heights---crazy beautiful), that is too expensive, we land at an open house in Highland Park on 56th Avenue, not far from the 110 Freeway.

The place is so super charming, Megan has to make an offer. It's a 1926 house. Great garage that has been expanded for a studio. Huge yard covered with grape vines, a fig tree and an orange tree and a crapped up house that is dying to be restored. The bid has to happen. We grab Adam, come back. He thinks it's great. We go to dinner in Laurel Canyon at Pace.

Cross continental girlfriends digging their heals in on cell phones, forcing each others' hands. Trying to find out if they are committed enough to move together into a house across the country all during Megan's halibut.

And, yes, they are committed. Megan has to make an offer on the house in the morning. All offers are being accepted immediately. We have to jump. The circles under my eyes make Saturn look like earth.

So, today, after no one can sleep, we three all go back to Highland Park to meet the realtor and inspector. But first, we got to Wells Fargo and gather the money together at the bank for a 3% down payment. Yes, 3%. And an immediate inspection happens at noon-thirty. Contract is written up. Whole mess takes only three hours.

Bad lunch in South Pasadena. Adam drives home alone. I take Megan on the Gold Line to see Union Station and next, we take the Red Line to Hollywood, walk down to my house. And it's all over.

I have a meeting. Adam and Megan watch television. I come home. We eat Megan's banana bread. We all take Ambien. It is over. Fucking Dyke almost killed me. 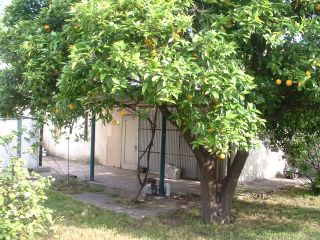 But, how was the banana bread?