Did someone ask for November 16, 1980 or thereabouts and then retract?

Today we got up relatively early and went to The Coop--bought posters, went to Boston's aquarium. It was excellent. We then went to Copley, got our record- Yes Album for Greg, walked all the way past 5 subway stops (we ate at McDonald's) and we went to see The Elephant Man. It was depressing but great. We then bought munchies and came back and ultra partied. We all passed out around 12. It was great. Goodnight.


What can I say? 1980, for me, was still 1974. And of course, the same was true for my brother and our best neighborhood friend, George, who were both still seniors in High School. They came up to Boston to visit me for a partying college weekend. Instead of going out to Saturday night Freshman College beer blasts, (which I loathed) we stayed in my dorm room and well, the picture below says it all. That's my brother with the bong. George is stoned on my bed. I took the picture. What the fuck has changed?

Oh yeah...I'm no longer in college and we're all way fatter.

I can't believe The Elephant Man is that old. Shit. And Anne Bancroft was so good in that movie, as was that acting pachyderm. Speaking of which...at Tufts, the school mascot was Jumbo, the elephant. The original elephant was actually given to us by P.T. Barnum. Why he gave us Jumbo is anybody's guess. I imagine the circus was in Boston when the elephant died and the Tufts science department said, "We'll take it!" And they taxidermed the frigging thing and it was the centerpiece in the lobby of the Biology building.

Well...many years later, there was a fire and the whole Biology building burned down, including the stuffed elephant. By the time I got to Tufts, and majored in Biology, there was only a bronze statue of a pachyderm about two feet by two feet commemorating the original Jumbo. What a circus. An interesting note for linguists: the word jumbo actually comes from this fried elephant.

The Yes album was probably that really bad one from 1980. Since we bought it in Copley Square, I'm thinking we probably got it at Strawberry's. The Yes album was called Drama and I think my brother only listened to the album once and then promptly gave it to me--during Christmas break, if I recall. The design on the cover ultimately inspired the visuals of a trip I took on mescaline about a year later.

I always liked the Boston aquarium. In fact, Boston is a great place. This diary entry makes me want to do the obvious: light up-- but I can't because next week we are having physicals for our life insurance. Hopefully, when I die, Tufts will take my donation of all these diaries. Fuck, if they'll take a dead elephant who never paid any tuition, hopefully they'll warehouse a box of books about the tedious life of a turn of the century human. 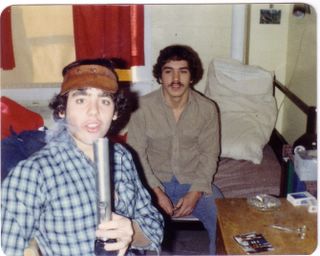 I love the rounded corners on that instamatic picture, and I can actually feel that "silk finish"....