We Came, We Saw, We Ate Yak or

Do not adjust your screen. For the next dozen or so paragraphs, the Open Trench has been turned over to Guest Blogger, Daniel Kaufman. Always one to come to the aid of authors putting the final touches on their literary work, I have stepped in for the day to help our e-host out.

My original intent was to blog the evening out with Don and friends at a Culver City Nepalese restaurant last night. But in the end there really is only so much one can say about Yak dumplings. And anyway, the best line of the night came from an out-of-town guest who responded to Don’s and mine’s wish to be living in a fascist country run by Oprah with the poetically simple, “we already do.”


There is a subject more pressing I have always wanted to air publicly. Since it looks like they’ve found a replacement for Bob Edwards, the Open Trench is the most open trench I may ever have access to. So, here goes. Leslie, avert your eyes.

As a faithful adherent to the adage, “always shit on the company dime” I often find myself unloading at the workplace crapper. For many it is not a pleasant experience. For those that work at an Arco station, it probably never can be. But for the rest of us, I believe with some basic ground rules, it doesn’t have to be that bad.

To that end, I would like to initiate a public dialog on public deification. The following is in no way comprehensive, and of course it represents my own issues. I am merely putting this out to the universe as a touchstone that may hopefully bring on a new age of peace and harmony in bathrooms across America.

Article 1. Bathroom Communication
I don’t know what it’s like in the women room, but in the men’s room entering a restroom for urination carries no social stigma. If a man sees a work chum at a urinal cock in hand, it’s perfectly fair game to initiate a conversation on a variety of subjects. Even jokes are fine. One of my favorites is looking down at myself and saying, “Whoa, that thing is oozing something green today.”

However, if one enters to do anything in a stall, one wants to be treated as if one has a spell of invisibility: you are not there and you never were there. If you see me in the hall later that day, it will be like it’s the first time you’ve seen me. For this reason I propose rule 1.A. to be:

1.A. The Shitter Must Be Granted the Cloak of Invisibility

The shitter also has a social obligation if he or she is to be expected to enjoy his cloak. Now that you are in the stall, you must strive your best to be as if you are not in the stall. Gas is acceptable, as the saying goes, “shit happens,” but nothing forced or excessive. Groaning is only okay if it’s an involuntary reaction. Talking on the cell phone may be fine in Haifa or Islamabad, but not in the US of A, so put the damn thing on mute and text message if you have to. Conversation of any kind, except in dire emergency, is verboten.

Now, my brother differs with me on this. His philosophy is to break the social stigma of the public shit through boisterous communication. Frankly, his philosophy for a lot of things involves boisterous behavior. I am not my brother’s shitter which is why I propose rule 1.B. to be:

1.B. The Shitter Must Be Silent

Let’s face it, nobody wants to walk into a cramped space with feces everywhere. In fact, we don’t want it anywhere. If the remains of your Culver City Yak dumplings didn’t make it down the drain with the first flush, go ahead and give it another. Give it a fourth if that’s what it takes. And if the water pressure won’t do the job, damn it, wad some toilet paper and clean that mess up. To address this issue, I propose rule 2.A.

2. A. The Shitter Must Remember the Boy Scout Credo and Leave the Stall Cleaner Than They Found it

I coined my own bathroom adage a few months back, “When going to shit on the company dime, never go into the bathroom behind a fat man carrying a Robert Ludlum book.” Bathroom reading is fine, but take what you are reading with you when you are done. As a toilet reader, I often find myself in a stall with nothing at hand, and your old newspaper is damn alluring, even though it may be the Sports page and have remnants of your doody. When reading in the bathroom, remember rule 2.B.

2.B. This Place Ain’t A Library


And so ends my brief tenure as your blogger. While it is an end for me, I hope it will be a beginning to a frank discussion of this most basic of bodily functions. 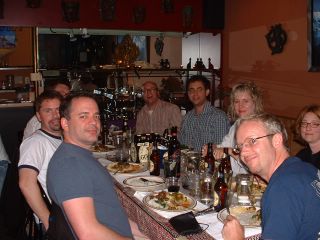 I just have three things to say:

1) We had coed dorms and bathrooms freshman year at Tufts. Every night after dinner, me and Ma (Cynthia McQueen...the Junior on the floor of we freshman) would sit on toilets next to each other after dinner and crap and talk.

2) I could crap in the middle of Dodgers stadium with a crowd watching.

3) I always tend to crap in rich people's houses. Something about a mansion makes me nervous and I just end up having to take a crap.

Thanks for being the guest blogger. Come back and guest whenever you want! Don

Borrowing from a Lyndon Baines Johnson management technique, I like to talk to others about work while I clean out my colon. I on't make them come in, but if an employee is there, I like to ask how the code is coming for the big project.

Thanks, Dan! Wonderful surrogate for Don!

What about those who observe the courtesy flush and those that don't?

Women, is it difficult to wipe from front to back?

1.A.While the shitter may crave the cloak, there are some exceptions. Clearing one's throat or making some kind of noise is sometimes a good idea if you don't trust the lock on the stall, assuming there is one (hell, if it's Arco there probly isn't even a door) Actually, one can still be invisible in this case, just not inaudible.

2.B. I agree, the shitter should try their best to be silent, but since this is not always possible, I would like to suggest some bathroom etiquette that I employ. If you enter the bathroom and hear the invisible shitter clearing his throat or are otherwise privy to his presence (sorry, girls, dunno if this applies to you,) why not let one rip at the urinal? It might put the shitter at ease knowing he too can make flatulent overtures without employing the courtesy flush.

2.A. Though I would love to see this become common practice, I work at a hospital where apparently 2 out of every three people are incontinent, inconsiderate, incapable, or some combination of the three that somehow prevents them from ever cleaning up after their doody.

2.B.I'm kind of up in the air on this one, I think that it's a toss up between promoting good hygiene and promoting literacy. It's hard to say what society needs most. Perhaps we could create a shitter etiquette toilet paper roll so that people could get a little of both (damn I should patent that!)

1.A. & 2.B have herby been amended by the "non-verbal communication clause." However, the use of flatulence as a communication tool is not advised. While a trouser cough sends the message you outlined, I feel it sets bad precedent. I mean it starts in the bathroom and before you know it, people are doing it on the bus. Also, you don't want to wander into a restroom in the middle of that kind of conversation.

2.B. The promotion of literacy, while a noble cause, has more efficient and hygienic avenues. Flushable literature is a great idea. Maybe each square could have a quote from Oscar Wilde or a snippet from Mao's Little Red Book. It's the fortune cookie of the new millennium. Run with it Ray Ray and leave that dirty hospital toilet to the incontinent.