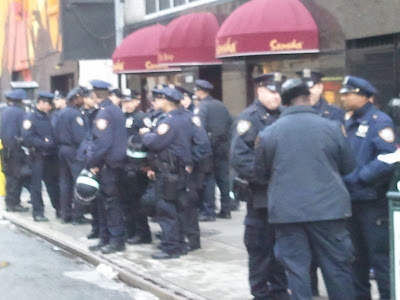 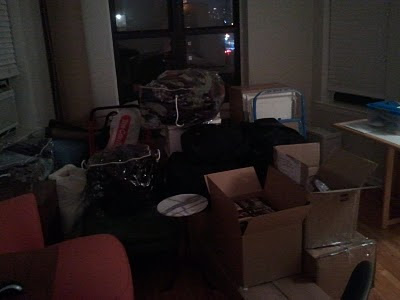 It's an Okie Christmas. Fleeing West into the fertile valley of Manhattan. Hope it's everything they say it is. Not afraid to pick fruit. Merry Christmas from my farm to yours!

Moving this week. Adds to the wild ride of Christmas. It’s worth it.
Posted by Don Cummings at 10:34 PM 0 comments

Don’t Ask Don’t Tell being repealed does not make me feel like the right thing has been done. That is a thought more than a feeling. The repeal makes me feel happy and a little less scared.
Posted by Don Cummings at 11:19 PM 0 comments

I'm not one to hold onto the past for too long--but today (December 16) is the two year anniversary of our pooch's death.

She was no genius. But she was super sweet. She followed me home one night in 2001, not long after the debacle of 2001, and she moved in. She had no fur (mange), stunk like a trash heap (mange) and scratched 24-7 (mange). We just figured we would have the ugliest dog on earth for a year or two until she died. She lived 7 more years. And she was a beauty. Completely lovely.

I don't miss her day to day any longer. But when I think about her, I get a feeling that nothing else gives me. And because it is my feeling and feelings cannot truly be described, I will try my best. She makes me feel sweet and young and calm and hopeful and caring. It's so warm. And now when I type this, I smile like crazy. She was happiness. Purely. 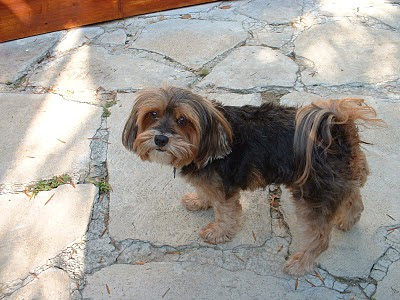 You get cash from the bank when you put a deposit on an apartment. Cold and real. The agent pushes it through. The application is a breeze. Renting might be the easiest thing I have encountered. You get so much for such a small decision.

The market of anything is fun. I would like education and health care to become utilities, but everything else, make it a market. It makes people lively. Gives them spirit. And there is truth in interaction. It's even warm in nature. Certainly in apartment hunting, the broker is extremely human, midwifing you into home rebirth. Sure, he or she pushes you to get back to the office to fill out a contract, that is their goal, but until the push, there is complete humanity. It has to work that way. You are talking about where you are going to live. Pretty intimate. I enjoyed the combination of being vulnerable and then having to throw cash.

Our Coop in Queens has sold and we are closing sometime very soon.

A handful of people are getting shifted around.

Our new apartment is swank neutral in a white brick on Eighth Avenue. Noise is distant and whirring but real. Schnaz and comfort. Large and open. Easy to be there. A two block walk to my Recognized-by-the-State-of-California-Domestic-Partner-Adam's boulot.

They say you can't have a dog. But friends, I've heard some barking. 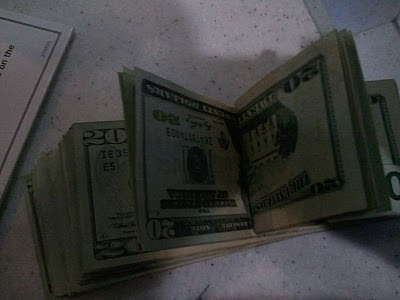 Or would it be more proper to call them ghouls-de-Noel?

A 1940s Subway train pulled into the 4th Street station on the F line today. Its terminus was Second Avenue, Lower East Side. It was both a holiday gift and a Museum of Transit advertisement all in one. It smelled of diesel. I remember trains something like these in the late 1960's.

Everyone was so happy. It was new. Monkeys like new things. And why shouldn't we! We're monkeys! 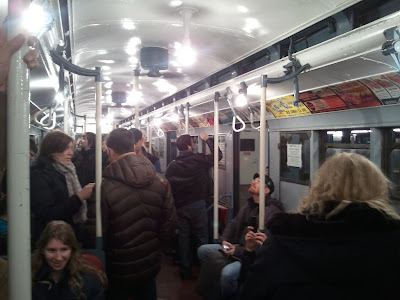 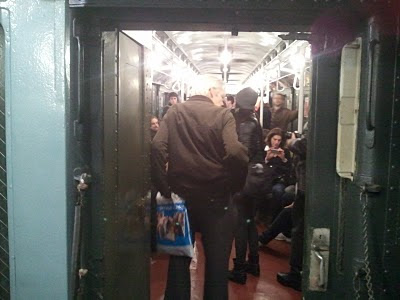 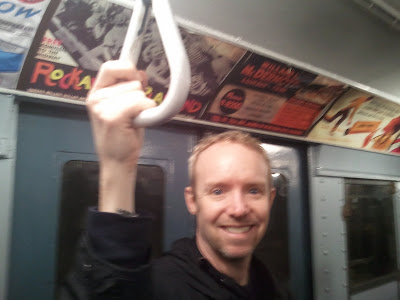 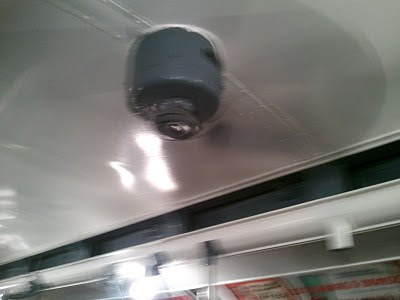 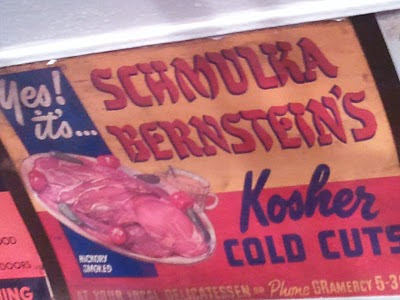 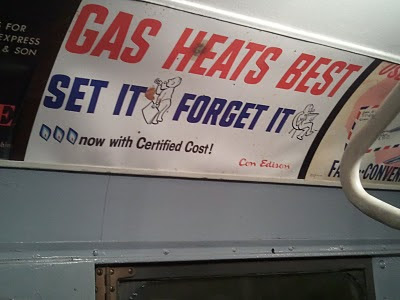 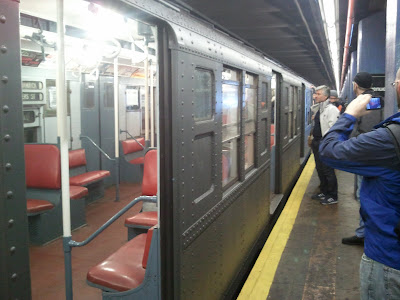 It’s like, if they could go back in time and have wives and children killed and buried along with dear old important dad when he died, they would do it. And why, “Because we’ve always done it that way.”

If I were president and this was happening to me, I think I would resign and take that ambassador job in Lichtenstein. It is so discouraging here. How could anyone take it? This tax thing. This blocking of the Don’t Ask Don’t Tell repeal.

This is the kind of night that is so sad, Obama probably wants to go smoke a cigarette. I know it makes me want to just go suck a cock.
Posted by Don Cummings at 10:08 PM 2 comments

How to Build a Jesus

I’ve had Jesus on my brain all day today.

The earth had 150 Million people on it. This was dense. Enough communication was going on, through trade, to make enough people understand that it was time for a change. Too much shitty animal behavior and only a bit of human kindness.

Hey, what we really need, everyone starts to think, is a new way of being. But we’re so patriarchal and take our orders from on high so we better make a leader who we can look up to. Let’s pick one of these nuts who crop up weekly who call themselves the Son-of-God.

And though Jesus was a madman, he was the necessary madman at the time.

Going mad today to change the world might not be a bad idea. But maybe it won’t have to come from on high. Philosophers try. But logic or empiricism or rationalism won’t ever really do it because so many people are illogical, cannot see or have no judgment. As I get older and lose some of my kick, I see the appeal. It’s just easier to be a little less aware, a little less thoughtful.

Plus, so many philosophers, Voltaire, Hume and Hegel even, there was this, ahem, ego…(not that I don’t get it.)

So---you need a little magic, beyond the rational, to effect a big switch. Someone get to it. I’m too old, unready for primetime.

Ah, Jesus. Lover of lambs and everything else. Someone needs to do an installation. Jesus as many things: Cuban thief, ugly loud mouth from Long Island, whore with a heart of gold, drooling moron, gay slut bottom who can go all night, all that, in large painted panels would be good right about now. Show the world that he really was all things. And all these things are human. And, hell, why not give them health insurance?

We need another shift.

Build a Jesus.
Posted by Don Cummings at 10:44 PM 1 comments

Aren’t we all drag queens?

Torquoise and Brown, together at last. Gone.

Being against gay marriage.

My lack of taking responsibility for the amount of vegetables I eat.

The average person’s love of the internal combustion engine.

Fear of the unknown.

The-Sky-is-Falling mentality toward new media, which is now feeling old.

The use of the word Pussy to describe anything except for a cat or a pussy.

Plastic surgery that makes you look like you are wearing a mask. Or just all of it.

People using the sarcastic question to an obvious statement, “You think?”

The lack of proofreaders at The New York Times, which has made the paper less readable.

Obama’s sack hanging like a deflated dog’s pouch the day after being neutered.

The binary world view of the average Conservative. Eyes and ears do open.

Being Moderate is no longer uncool, but the coolest thing ever.

Quality free education and very affordable health care for everyone being at all considered a sort of communist plot.

Making fun of France. Especially if you have never even visited the place.

Any shred of respect for George Bush’s self serving biography.

Calling things addictions that are really just over indulgences.

Pretending the Smart Car is something worth having.

Friends who only see you as someone to serve their needs, nothing more.

Complaining about the weather or the distance.

Romanticizing and exploiting the art of the victimized.

All that cheese.
Posted by Don Cummings at 9:43 PM 3 comments

Lately, I have run into people who have asked me for advice. It ranges from career things to “my kid is experiencing…” or something as simple as relationship squabbles.

Underneath the entreaties, I hear an underlying theme, repeated:

HOW CAN I GET THROUGH THIS LIFE WITHOUT PAIN?

And the only answer is: you can’t.

So why not enjoy the pain? All of it? It is more painful to resist pain than to live it. So live it. It passes. And it usually presents something positive on the back end.

I feel bad for us. We are told again and again that if we do everything right we will not experience discomfort, we will always be happy, there will be no struggling. But I have not met a person on earth who has had this experience.

So, “Thank you sir, may I have another,” though a bit past what we need, is not that far off.

Have a painful yet somewhat satisfying day.
Posted by Don Cummings at 10:00 PM 1 comments

When I was in college, I used to get high with my friend L and we would talk about what song we would like to be played at our funerals. We agreed that Led Zeppelin’s Kashmir from Physical Graffiti would be a great song. We played it over and over.

Lately, I’ve been thinking a bit about death. Mostly because winter has hit but also because this movie thing I’ve been writing, though comical, is about a big ‘ol death.

As I get older, I understand that death might be a very interesting explosion that could possibly feel good. Or at least it will be a very clear action.

And with this, I bring you this Asteroid YouTuber, with Pink Floyd in the background that is a beautiful rendering of the-end-of-days.

It was an Umbrella Graveyard kind of day. 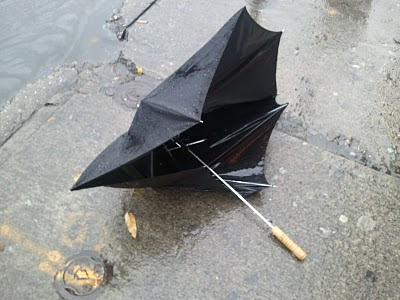 But then the Sky Opened Up--and Winter arrived. 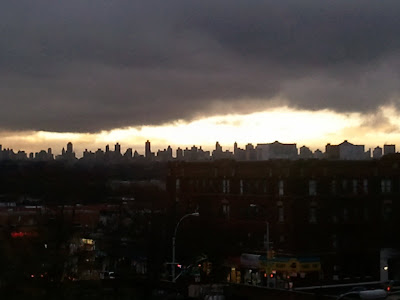 Funny. The military is ready to let the whole Shut-the-hell-up-about-your-homosexuality law go.

And some posturing Republican senators are a wreck about it. Apparently, even though 70% of the entire military is comfortable with letting gay people serve openly, some cretin Republicans are getting in bed with the 30% who are still crying about the inevitable.

Why can’t they change? Why do they hold on so tightly to the past? Because they are homophobic. Couching it in terms of anything else, well, you can hear the hollowness.

Of course, this IS the thin edge of some big gay wedge. It is the first in a tumbling series of soon-to-be acquired equal rights that are just around the corner. And oh my! How can this HAPPEN?! In God’s World!

It is an old, disgusting thought and 70% of the military agrees with the following statement: Lying is simply bad for everyone.

So scared Republican politicians, go ahead and posture, if that’s what you believe your constituents want. However, you will go down in history as just a name that was on the wrong side of an issue at the wrong time. And people will quickly remember you as that. Bye-bye. We have had enough of you.
Posted by Don Cummings at 1:08 AM 0 comments