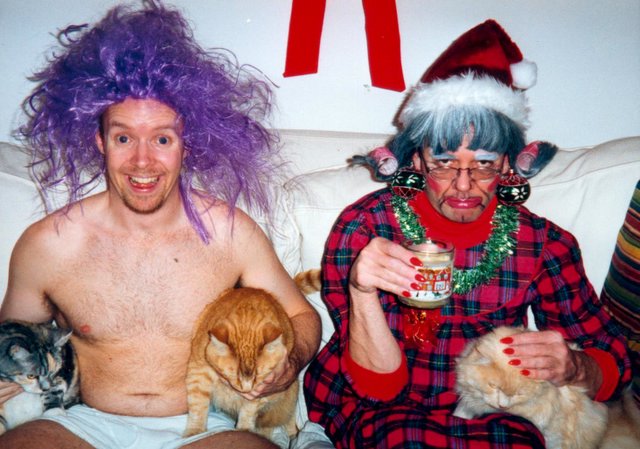 Wish you a Very Merry Christmas.


Have a wonderful holiday season. The blog returns in the new year. Until then, deck those halls with boughs of holly and don you now your gay apparel.
Posted by Don Cummings at 11:05 PM 4 comments

Hype is such a drag.

The movie, while exceptionally well acted, was kind of dull.

I cannot say I have any understanding of 1960’s gay love in Wyoming. Nevertheless, the whole thing seemed a bit false to me. But what the hell do I know about Rocky Mountain man love?

Starting with Annie Proulx, this entire project was set into motion with good intentions by well meaning straight people. But I just, I just, well, I just don’t feel like they really caught it. The real hot desire. The real paranoia of being found out.

Also, the romantic nature of the story seemed like a woman’s projection upon men. The sensibility, even though the guys wrestled and tussled and punched, came off just a bit too female in its “love”. Obviously, this movie was made for women, not for gay men. And like any movie that is made to please a certain audience, it lacks the mark of truth.

We must thank the critics for getting behind it, but frankly, the support might stem more from political consciousness than from cold eyed awareness.

Call me annoying, but there I am.
Posted by Don Cummings at 1:18 PM 2 comments

I Kid You Not

I could not have made this up:

After being in therapy for a few months in order to "get back in balance," I have run out of things to talk about. Hard to believe, but true.

While hunting through my brain for anything to fill the time, I started bringing up the tiniest issue about my sex life.

My therapist nodded off.
Posted by Don Cummings at 11:55 AM 3 comments

I went to the mall today for christmas shopping. What a rip off! I bought mommy a jeanie lamp incense burner, daddy a plaque that says "Never trust a man that doesn't drink." Sally a capricorn band, and Greg a flash light. In a store called "Mexico" in town I got Wendy a blue pig, chris an onyx frog and nanny this clay pot. The T.V. specials were on tonight for X-mas. How the Grinch Stole Christmas and Rudolph the rednose reindeer. I'm going to the poconos tomorrow and Wendy and Chris are coming. Well Goodnight

The mall: Nanuet
Sally: my sister
Capricorn band: a leather bracelet that snapped together...with the Capricorn goat embossed upon it. Chic.
Greg: my brother
Nanny: My maternal grandmother, whom I was very close to
Wendy: The upstairs neighbor in our two family house. My sister's age.
Chris: My best friend at the time. Big party guy. What in the world would he do with an onyx frog?

The Poconos: We had a little vacation house there for a few years. It was very cute and extremely woodsy. I used to catch salamanders and make terrariums to put them in--in large 5 gallon glass water bottles. I also learned to ski there.

When I say "What a rip off!": I'm sure it was code for shoplifting and I dared not write it in my journal, for fear of someone reading it, or the police hauling me off to SingSing.
Posted by Don Cummings at 10:13 AM 1 comments

This morning I put up another santa clause. Tomorrow I'm putting christmas lights on the trees outside. Can you imagine how yellow this book is going to be when I read it years later. It is 1974 and I predict I will read it in 1992.

In my house, I was Brother Christmas.
Posted by Don Cummings at 3:39 PM 2 comments

Last night, we were on our way to a special screening of Brokeback Mountain in Beverly Hills and we realized we would never make it on time, so we made a left turn and landed at the mall (The Grove), had some drinks, salad and mini-burgers at Whispers Lounge and then saw Rent.

To our fun surprise, our friends Lisa and David were there. We sat with them.

You know, we all liked it. I mean, it got bad reviews. And the entire staff at The Grove, while we were buying the tickets or getting them torn, would roll their eyes and say things like, “Good luck,” or “You really have to like musicals,” or “They sing almost like the whole time.”

Gay people tend to like musicals. I don’t know why. Maybe it’s because we did so many of them as children. Maybe it’s because life was always so harsh that the idea of really warm, exuberant people dancing and singing in the street while hugging each other with downright acceptance seemed so appealing. Maybe we just like that kind of music. But there we are, all gay and happy when the overture begins. So Adam and I, gay babies that we are, were inclined to like this thing. And Lisa, as many people can attest, is just a gay man in a woman’s body. And David, well, he’s straight, but he’s married to a gay man in a woman’s body, so he gets it.

The actors were all too old for their parts. But remember Stockard Channing in Grease? Wasn’t she like 38? I didn’t mind them being too old. I was glad that the original cast got to do the movie. They understood what they were doing and they sang really well.

The direction was flat (Chris Columbus of Home Alone fame), but I sort of liked the straight forward, almost archival shooting of it. But then, I like Neil LaBute movies. Sure, it could have been way more interesting visually. But there it was. I can assure you, it was colorful. There was a big Fame-like scene where everyone danced in the street. There was a fun Hair-like scene with everyone dancing con brio up on a table. Obviously, Rent is the descendant in a long line of pop musicals “with an edge” ;)

The score is pretty great. I like pop. Especially this sort of musical theatre 1970’s-80’s type pop. The writer/composer, Jonathan Larson, has a great ear for very interesting harmonies and it was a pleasure to just sit there in a movie theatre listening to it.

The book, lyrics, well, they’re cheesy. The play was the same way. A bit jejune. A bit self-serious. If Mr. Larson hadn’t died so suddenly after completing the play, perhaps there would have been more tweaking, cutting, etc. But with reverence, everyone accepts the words of this musical. Frankly, I wish people could be more honest about the silliness and the melodrama, with maybe a bit of a wink. But nothing arch ever comes into play, here. Just angst, joy, heroin and AZT.

Go see Rent, if you are gay or like musicals or are married to someone who is gay or likes musicals. Otherwise, hold out for Brokeback Mountain, no matter what your leaning. Unless, of course, you can handle two gay movies this month, then try both: The urban singing one and the romantic cowboy one.
Posted by Don Cummings at 12:04 PM 2 comments

Who wants a future mountain of landfill sitting around the house?
Not me!

I want nothing more than three onesies and a rice bowl. When I die, I want to land face first into the bowl and break it. The onesies can be given to gerbils to be chewed into nesting material.

Though I do love my electronics, I must say, I only love them for their usefulness. I wish they were made out of cornstarch so when they become obsolete, I could just run them under some water.

We all do better when consumption is decreased. An economy based on growth is an economy in denial. Pyramid schemes, like all pyramids, will eventually crumble. And why should you run around the base of that pyramid, buying things no one needs, only to support the few greedy Tuts at the top who, in their lofty altitude, are the only ones above the cloud cover of pollution caused by the fearful, frenzied activity at sooty ground level. No need for this any longer. No need.

This Christmas, why not give food? Like fruit. Or pudding? These are things that won't linger in someone's regifting drawer.

Friends, the joy is in the Ha-Hoo-Dor-Ase. Though I admit the colored lights of Christmas are pretty, it would be even prettier if instead, we just burned a few candles in the windows.

Stop shopping. Turn off the television. Take a bath. Eat a pot roast.


Buy Nothing
This Site Courtesy of D. Kaufman
Posted by Don Cummings at 2:35 PM 2 comments

Let's Put Down the Weapons and Have Some Glug

As the party season starts to heat up, it becomes very interesting to see human beings enjoying the close comfort of their fellow mammals. There is something about December that brings out the goodness in people.

Furthermore, it seems to me that people actually do like to get together with close friends under cozy conditions. It brings out the warm, safe glow of the heart, etc., things like that.

What always strikes me at holiday events is at least two people will say something akin to, “We should do this once a month,” or “ Why do we only do this this time of year?”

It is bizarre that people will allow themselves this cozy feeling at Christmas, letting down their guard, acting downright old world Bavarian fireplace-like and then as soon as it is possible, say January 2, they will shelve these feelings along with the ornaments and unwanted gifts and return to a certain obeisance to competition, acquisition and fear. The post Christmas letdown. The slushy head.

I don’t want to get all sappy here. But I guess I am anyway. The short days of December, of course, are more conducive to little get-togethers, candles, sending out waves of caring to others. But I always think, especially during the dog days of August, “I wish it were Christmas. During the holiday season, the sun will not pelt my skin. The loud music coming out of cars will be quieter. People will slow down and work less. The food will certainly be so much more pot roastish. And good will toward men will be back in fashion.” But then, I don't really like the beach.

Troops come home. Greed be gone. People consume less. A subway for LA. A relaxed and happy citizenry comprised of those who care for each other. The New Green City of New Orleans, please.
Posted by Don Cummings at 12:52 PM 1 comments

Is it due to the negative hype or is it really true?

The LA Times just sucks. I mean, it used to be that you could get up in the morning and read this fun, snarky, liberal, informed newspaper and you felt good to live in Los Angeles.

Now, since the Chicago Tribune got a hold of it, reading this rag has become a very bland task-- not unlike perusing USA Today.

I hate it. The sound of the paper hitting the sidewalk is deadening. Where have all the writers gone?

I see a 63% possibility of cancellation in our future.
Posted by Don Cummings at 11:37 PM 5 comments