TUESDAY, September 11, 8PM (7C)
On NBC
AGT Semi-Finals!
Don't forget to vote for my beautiful husband and his beautiful choir, AGAIN, on Tuesday evening (tonight) on America's Got Talent!
The outcome of this round will be determined by your votes to send them to THE FINALS, so vote early and often. There are four ways to vote and you can vote for Angel City Chorale up to 10X with each method. Voting begins during the live broadcast and ends at 7AM Eastern Time the following morning (Wednesday).


I hope you enjoy the show. Choirs are cool again. YOU have always been cool. 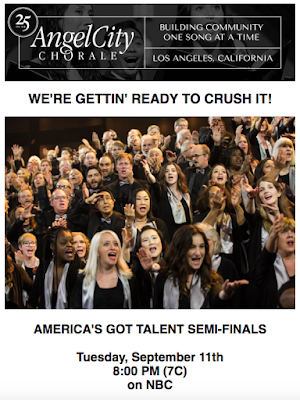 You can Vote 10X, easy, each time you sign in. The app and the online voting will remember your sign-ins, so you can just vote wherever is easiest for you.

If you are A MANIAC, and I know you are...you can revote 10X each using different email logins for methods 1 and 2. You just keep signing in with the different email addresses you have hidden around all over the place and you can vote another 10 times using the new sign-in. It's not really stuffing the ballot box...it's more like, "network television enthusiasm."

3. Vote using the toll-free number provided during the broadcast.
NUMBER WILL BE PROVIDED ON THE TV SCREEN WHILE THEY ARE PERFORMING.
You can vote this way 10X, but only 10X, assuming you only have one cell phone number. Just keep redialing. It costs nothing. You can do this in addition to the app and online methods.
PHONE NUMBER IS 1-866-60-AGT05      1-866-602-4805

4. Xfinity X1 customers can vote via their set-top box by saying "Vote for AGT" into the X1 voice remote or by pressing the remote's Info button.

And for Wednesday (a note from the choir):