We Have Got to Get it Together?: 14 years in the Making

Everything old is new again. But my opinion has changed.

I did not mention this as part of my blog post from April 29, 2005, but I remember I got into a little domestic spat with my husband, then boyfriend, and I took a walk, late at night. I don't remember what the fight was about. Probably something silly like, "You don't pay enough attention to me," or "Why won't you ever close the kitchen cabinets after you open one up?"

So there I was in the early years of blogging, running away from home with some anger, with my senses wide awake, my thoughts pounding through scenarios. I went for a brisk walk and landed at a coffee shop when a great old song, Something in the Air, came on, the main refrain being, We have got to get it together. To calm myself and to just get the hell on with life, I wrote an entry about how the Right and the Left have to get it together. Maybe the domestic squabble, needing psychological tending, was weighing on me and I had the simple need to get two opposing sides to come together. That, and also, our national schism weighed on me heavily in those days. (Still does, obviously.) But I was optimistic. I really felt like we, as a nation, with all our differences, could lean on each other, accept each other, work together, open up, get it together, and make a shiny future.
Here's the post:  April 29, 2005 Blog Post

Not much has changed in our country since 2005. Except, actually, our schism has grown worse. Meaner. Uglier. At a tipping point.

So this is what I think today: We are never going to get it together. The Right and the Left are even more divided now than we were in 2005. I think Russia got what it wanted: to split us apart permanently. I think the Right is getting what it wants: a lunatic leader frothing at the mouth. The Left? We got AOC. We'll see what she pulls off over time.

I no longer believe in our country as a viable nation. The Cold Civil War has been going on since Johnson. With each new president it has only gotten worse. So let's divide. Or at least, let's make the federal government weak and let each state government get much stronger. But with that, let's also flip the tax bill. I pay 25% to the feds for a few programs and the military and I pay 75% of my taxes to California for clean energy, education and healthcare. The inhabitants of Red places, like Alabama, can also send their 25% to the IRS, and use the other 75% to do whatever the hell they want to do. I can't care about them any longer and I know I cannot change anyone's mind about anything. I can't stand how they think and I know they can't stand how I think. So...a nice loose divorce into strong state independence with nothing but the military to hold us together seems about all we can handle. An extended family of convenience.

We will never get it together. It isn't possible. Sigh. So let's reconfigure the system. Maybe Trump's destruction is what was needed. Maybe Trump really isn't the disease, just the symptom. We got what a compromised, federal system deserves. Now let it fall apart. As painlessly as possible, please. Tax me like you mean it, Sacramento, and let's make the utopia we know we can forge with all our creativity, wealth, inclusiveness and science. And please, let's clean up the Central Valley. No one needs to look at those sad, dying cows along the I-5.

Posted by Don Cummings at 1:46 AM 0 comments

Bent But Not Broken releases March 15, 2019 with launch parties in Los Angeles on March 15, and in New York on April 16. (With more events to follow.) 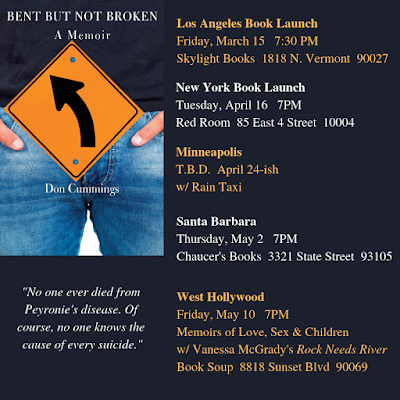 Thank you for all your help and support. Writing a book and getting it out there is not at all a lonely pursuit. So many talented friends and family come to the fore. I am so grateful.

If you have not received a newsletter about the launch of Bent But Not Broken in the last week, that may mean you are not on the mailing list. If you would like, please Subscribe Here.

Also, you may RSVP on the website. Scroll down to "Events."

If the urge overtakes you to share my website about Bent But Not Broken with others on any and all platforms, please feel free to do so.

My First Blog Entry, But Not Really

I began blogging a year after Facebook was born and a year before Twitter hatched. I was very committed to it. Not many people that I knew were blogging. In fact, I felt sort of bashful jumping into the fray, being so public with, well, anything at all. Quaint, right?

I blogged approximately four times each week. It was good practice. I had already worked on a book and many personal essays and plays. Blogging was a great way to get some words out there while I waited for other things to solidify. It was great practice. It gave my life rhythm.

Blogging was quite popular, remember? A few years slid by and Facebook took over. Then Twitter flew in. Blogs were eclipsed. But I kept blogging because I have a hard time stopping things. I also did not want to adjust my focus from something that felt quite natural to things that appeared so bizarre and annoying. I barely understood why anyone would want to have friends online as opposed to in-real-life and my brain turned into soup when I tried to figure out what to do with an @ or a #.  No matter how many times people explained them to me, I just got confused. I kept blogging. It felt much closer to how life is really lived. I went at it pretty hard for about ten years. I tapered off, though it felt like I was abandoning something I had started and I felt guilty and strange. Like how you feel when you were young when you stopped rotating all your stuffed animals on your bed. But my gut told me that blogging had become yesterday's mashed potatoes. There was such a wave of cat vids and pokes and two different choices of news feeds and walls and mayhem, and people just going sort of crazy for snippets, that if you blogged, you sort of looked like you were trying to join the digital conversation with a buggy whip. I joined the others, blogged less, and headed into the future toward an American election controlled by Russians and racists.

But long before all this ramped up Gutenberg-on-crack--there were diaries, journals, scraps of paper thrown into a shoebox, that felt much more important than blogging, even.

On February 16, 1973, my mother was cleaning out the dining room server. As I walked by, she pulled out a desk planner diary for that year. My father's overlord was General Motors, and the company sent him some kind of executive desk planner each year, until they stopped. My father never used it. It came in its own box. It was a grayish powder blue. In those days, anything that was kind of new and nice, well, it seemed a shame to throw it away. So, I'm walking by, going where, I don't remember, and my mother, with serving bowls and table cloths on the floor, a can of Pledge, a rag, and the desk planner in her hand, asked me, "Do you want this?"

She said, "Don't take it unless you're going to use it."

I took it. I put a rectangular smile-yellow sticker on it with my name in the middle and a thin black border around the edge. The font was thick and 70s funky. This sticker came from a collection of stickers that were printed in many shapes and sizes that all said my name. You could find your packet of stickers in a twirling rack, arranged alphabetically, at Expressions or Spencer Gifts at The Nanuet Mall. I added an 's to my name on the sticker and wrote the word Book beneath it. Titled and ready, thus began my one-page-per-day diary/journal entry habit that I have maintained every day since. It's sort of OCD. But then again, it was born from an OCD tendency (my mother's cleaning) and my OCD tendency (no reason to stop any habit).

I skipped 1976. I think I was going through a too-cool-to-do-it phase. But I missed it, so I picked it back up again in 1977. So I am in my 46th year. Perhaps this is what made me a writer: the need to keep things clean, recorded and remembered. Then, because that may not be too interesting to others, I figured I could make something out of these honest recordings, or really any unvarnished truths from life that I remembered that were or were not written down. Then, to make it fun, you add some personality to it. Keep in mind that almost every story is a fight between love and fear. Fight for some sort of clarity and justice, humor and connection. Pick a format--play, book, film, poem, song--And just keep going.

This might be a little nuts, writing it all down, every day, not missing even one twenty-four hour period. But besides 1976 (which I summed up at the beginning of my 1977 journal) I have never missed a day. I have all my stories. When I was a kid, I called it My Book. Sometimes, I still call it My Book.  Nothing seems to change. Other times, I do call it my journal or my diary, more often, my diary. I had no idea I would become a writer. I thought I would own an aquarium store or, in my real big fantasies, become a pop star.

If you think we did something together on some date since February 16, 1973, just ask me. I can look it up. 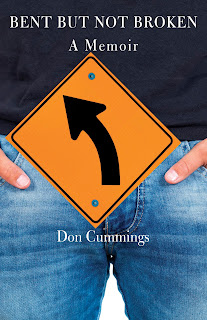 Posted by Don Cummings at 1:58 AM 0 comments