It All Comes Down to You: Joni

I first started listening to Joni Mitchell, in earnest, during a weekend trip to Pittsburgh in 1979. My girlfriend from high school, Barbara, who was a year older than me went to Duquesne and my sister and I drove out to see her. Barbara had Court and Spark and we listened to it all weekend. I couldn’t believe how good it was. In fact, it would be "time for dinner" and I just wanted to stay in Barbara's dorm room so I could listen to side two over and over again while I smoked Parliaments. After that, I listened to Joni Mitchell all through the early eighties, took a break for about eight years and then listened to her every day since 1991 when Night Ride Home came out. Bought everything she ever recorded. And just became one of those Joni nuts.

I knew I would eventually meet her. She eats lunch at The Daily Grill in Brentwood almost every day. I thought I could catch her there, but I didn’t want to be a stalker. I figured—let our paths cross naturally.

My friend Jeff and I were walking down La Brea a month or so ago and we saw that there was going to be a Joni art exhibit. I got on the list.

Green Flag Song. Joni was going to be there. And so, I went. Friday night.

I had some friends come, too. Bart understands my love for that open chorded lady. He came with me, took pictures, and paid for dinner afterward. Mild mannered Steve, from my writing group, was quite aggressive. He really wanted her autograph. It was his assault that gave me the courage to talk to her. I felt bad for Joni. Most of the scrum there attended much for the same reason I did. Joni sallied in and out of the VIP room and faced the plebian gallery crowd for short bursts.

Of course, I was sensitive to her position. She was there to be with her art. To sell her art. Like any other artist in a gallery wanting to sell her work. Most of the public was there to gawk at the Joni Mitchell they love. The Joni that they play to get through life, breakups, work, anything.

After Steve got his autograph, I pushed in with a gaggle of women talking to her. And others were pushing all around me. It was tight. Very hot in the place. I am sure they exceeded the maximum allowable occupancy, at least with regard to the air conditioning system.

Three women engaged Joni in conversation about this work, Green Flag Song. Triptychs of news images of the war, printed in large green, grainy photos. Joni told the women how she had this flat screen television and she turned it on and just recorded Ted Turner’s news channel, then had images photographed using a paper camera. I have no idea what that is...but I imagine it's some sort of box with photo sensitive paper. And then she had the images printed into these triptychs. In green. She talked about how she does art for herself, that she never really wanted to get into the art racket. Very human. Very humble. Very vulnerable. She went on about the war images. She said, “It would be so much better if the men just went into a field and used bow and arrows in the open air. You know? It would be so much better.” And I jumped in with the need to engage, “Or big arenas where they can play out their war games.” Joni acknowledged me in agreement.

After she did a couple more autographs, and I could still feel our miniscule connection from the comment that I made, I pushed forward, put my CD booklet from Turbulent Indigo in her face and said, “I know your being swamped with people tonight. I just want to say I'm a big fan and I’ve listened to your music almost every day for twenty-five years. It's great to be here. Would you sign this?” She said, “Wow,” in a tone that was pleased yet a bit dismissive. Then I thought, "Well, I haven't really listened every single day for twenty-five years. Oh Man."

She signed it, To Don, from Joni Mitchell. And there it is.

Now, I am no autograph hound. In fact, this is the only autograph I have from anyone famous. But there I am.

In the end, I always knew if I ever met Joni it would be less than thrilling. First of all, I have this whole experience with her, in my room. And that’s kind of personal. And why would she want anything to do with that? My relationship is to her creations, obviously, and not to her. I think the only truly satisfying experience I could have with Joni would be to pull out the guitars and sing songs together. But that’s not going to happen.

So I settled for talking to her a bit about her art, getting an autograph and being happy that I got to say hello.

And Joni will never know who I am. And that's it.

Unless I start plotting. Could happen. 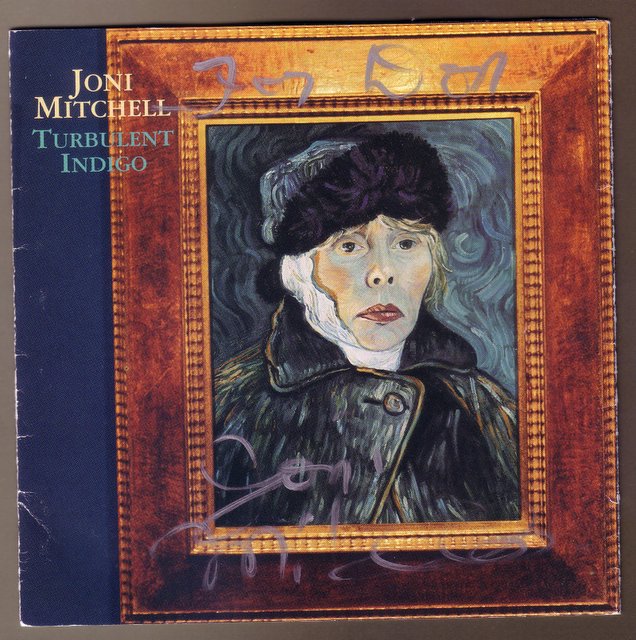 Oh, Don! So neat to be immortalized by vous in a piece about Joni! An autograph and lite conversation...You lucky dog, you! She is amazing and you are most deserving!
I miss you!
I will write and send pics soon!
Be well!
Barb

Well Donald My Friend, you finally did it. You basked in the aura of one of the people on this earth who helped carve you into who you are today. And you know what? She didn't sign the cd cover, To Don, she signed it "For Don" and that, I feel, is a direct response to your offer of dedication to her music. Well done. And I'm really exhilerated for you. I'm just sitting here smiling.

The whole time I was livig in Paris, we were listening to 'Court and Spark'. I was a free man in Paris. I felt unfettered and alive.

Congrats on meeting her. I'd go gaga if I ever met Bette Midler or KD Lang. I don't think I'd be able to speak.

your conversation is too truly and perfect completely according to my requirements as well.But my mcse exams are in hand as well.This is also very important and comprehensive and might be proved the better for you and every researcher as well.