Two Sides to Every Story

Of course, the intelligent, steady B. Obama is going to win this election. This excites me, internationally speaking, because B.O. understands there are two sides to every story. I am impressed with his foreign policy thrust: to see other countries as real places, deserving to be considered, fully. I am not talking about Iran, so much, but more, his general attitude--that we are part of this huge world and everything we do affects everyone else and vice versa.

So--in any conflict, President B.O. understands, it's not just what YOU want, but also, what does THE OTHER PLACE want? It's a bigger, more generous view. Where generosity exists creativity can flourish, problems can be solved.

Republicans are famous for HOME LAND, WE ARE NUMBER ONE, PATRIOTISIM, VICTORY!-- this is a very one sided view of the world. It just screams, ME! WIN! NOW! MINE! I GOTTA HAVE IT! PRIDE! GIMME! I'M BETTER! HUNGRY! KILL!

The problem with sticking to the one sided view is one ends up stoking one's inner monster into action. Eventually, the monster within will grow and break its way out and try to eat all the villagers of the world.

And if you are very unlucky, a camera might catch that inner monster. Some would even recognize it as a gargoyle. 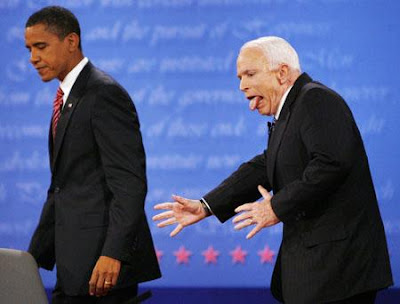