It is, of course, an Eva Peron kind of story. But what they did here was you were in the crowd, like at a disco (and eventually as part of the final peaceful revolution) moving as orange jumpsuit clad helpers twirled the platforms into different formations. (I say this for those who aren't in New York and haven't already read about this play 100 times.)

There were very beautiful songs with lovely harmonies.

The acting and singing by the all-Asian cast was full-blown spectacular.

There were graphics and very intricate movements.

We were all mostly on the dance floor, watching the play on platforms above our heads. It was a great way to experience a show. It felt very much like how it feels when you are a kid and you just turn your room into the play area.

The story revealed nothing new.

Side note: My mother, for many years, worked for a Filipino couple who were friends with Aquino. It was a grim day when he was killed. He was warned not to return. I remember being a kid and mistakenly thinking that he was shot in Boston, where he took off from.

And what about Imelda's shoes?  Well, in real life, they moldered and were tossed.

But back to the play.

It was the music, really, that wins. The staging was fun. The story was what it was. But the music, well, it was a great combination of disco, Byrne, musical theater and very surprising harmonies.

My question about a musical is always---How is the music? Because the form presses wrongly against subtle smart storytelling, so in my view, music is the thing.

And this music is great.

The shenanigans with all the platforms being so intricately changeable was a bit over wrought. And the ending was a bit of a folk guitar letdown. But the color, the love, the joy of these people all coming to life, then being oppressed and then getting themselves to rise up peacefully and winning...it's pretty triumphant.

Cool idea. It will probably open at a bigger venue.

Imelda did it all for love. I really think she probably believes it. She just didn't know that she, as a poor girl getting all that money would end up misbehaving so cravenly and selfishly. She learned it from America. And then she went past many points of even our low edge of decency.

But the play manages to show her in a fun light.

(I hate being forced to dance in public...) 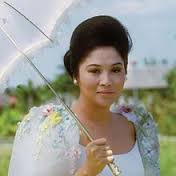