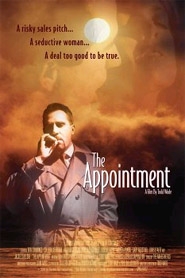 Open Trenchers, the time has come for the release of possibly the best movie ever made. How did I discover this film? There I was, innocently Googling myself the other day, getting very upset because even though I hold most of the hits on the first page of a Yahoo search, you have to go to the second page on Google to find me. Not a pretty thing for a self-involved Blogger who understands that the chances of someone clicking the 2 at the bottom of a Google page is about as great as my getting out of bed before 10 AM. However, since I can't control the world of Google, nor my bowels, I guess I'll have to just get over it.

The haunting wonder of that Google search, however, is even though the premier search engine is not kind to my ranking, in those Google pages, my Opus Enormus popped up. The movie is called The Appointment, a film noir, shot over ten months on evenings and weekends with a crew of loonies, a cast of poverty stricken actors and a director from Oklahoma with a dirty mullet. It was the big flick from the early nineties that didn't make me famous, but certainly taught me how dull and annoying it is to make a film. I was the star, yes. In every frame. With my own curly mullet. The film also features my 1992 Geo Prizm, which I still own and will not part with until they finish up all the train lines in LA. There's a hot love scene with my co-star, Colleen Corrigan, the soft-core porn queen of Encino, which is cause for hilarity. And for those of you who like violence, I beat someone to death with a golf club. I won't tell you what happens at the end of the story, except it isn't pretty and it involves scissors.

The movie is so quirky, so black and white, so suspense-wanne be, written in a style that can only be described as mock-Stanwick, and so stars me, that you just won't want to miss it. Plus, it features the sister, brother-in-law and mother of Sly Stallone. Yes, Jackie Stallone screams through a doorway that "The Goddamn security men are here." In her translucent performance she exhibits Streep-like genius. (I think these people helped finance this thing.) Their house in Brentwood, where we filmed, purchased by Rocky himself, had the grand distinction of cement lions on each side of the stoop.

Todd Wade, the director, is a completely great guy and he really followed through on The Appointment. More than ten years after he completed this film, it's actually for sale. Todd never found someone to distribute it, so he took on that job. Knowing it had to be set apart from the rest of the discs in the sale bin, he added a fun feature where you can actually edit the end of the movie yourself with outtakes from the shooting. Plus, there's commentary. I chose a burnt-out stoner voice for the has-been/never-was, Don Cummings.

And even though I have nothing but silly memories of the making of this movie, it is worth noting that we won in our category at the Houston Film Festival and placed quite well in a whole bunch of others. Philadelphia, Santa Barbara. Hell, I even went up to Napa to speak at one of the film festivals and on the way home I stayed in a motel 6 in San Luis Obispo and ate at Denny's in the morning.

It really should have been no surprise that my star vehicle showed up on my Google search. Last year, Todd had a big "release" party, focusing on the ability to do your own little editing on the DVD of this movie made for about 30k. The shenanigans took place at the schnazzy bar/screeing room of The Derby in Los Feliz, attended by a few of my closest friends. They watched me squirm as I watched a much younger version of myself up on the screen.

I certainly have made zero cents being in this movie, but I thought, if you have some time, you should check it out. It's so weird, hilarious and the costumes and hair are so fucking bad, you'll wonder how we weren't all round up and sent to fashion prison, or should it have been drama prison? Also, note the moment in the movie when I sniff the cold, hard cash in my macho Geo Prizm. My hair has completely lost its mullet, only to return in the next frame. And honestly, when you see me making profound, hot, love with Colleen, hornily rubbing her ample bosom (Yep, she was pregnant during the love scene), you will be forced to wonder, "Does he think he's kneading dough?" You'll probably pause to go get a carb-laden snack or maybe just chortle a little vomit through your sinuses.

During the shooting of The Appointment, I would like to remind you of some notables of the era. During one shooting day, O.J. was zipping around the freeways, being chased by police. This slowed down the work some, as we were all glued to the television in the makeshift movie studio out at The Brewery. The night after we finished the shooting of the final scene, which we shot first, there was the huge Northridge Earthquake and while standing in the doorway, naked, in Santa Monica, three things went through my head 1. How long is this fucking shaking going to last? 2. How much will it cost me to rent a U-Haul to move back to New York? and 3. What's going to fly across the room and chop off my dick? I went to Arkansas to do a play and Bill Clinton was our president so it was nice to be in Little Rock. Don't you so miss Bill? My boyfriend and I almost broke up. I only used a pager (which appears in the film). And, did I say that I sported the ugliest costumes and mullet in the history of celluloid while smashing and munching on girl-breasts?


You can buy the flick at Amazon--The Appointment.

Or maybe try to rent it or video-on-demand it at Greencine Video On Demand.

A nice review can be read at Living Corpse.

And another good one here at Filmcritic.com, though the reviewer does accuse me of chewing the scenery. What the hell else was I supposed to do? It was a low budget feature and I was hungry!
Posted by Don Cummings at 12:39 AM

Done. Ordered. Can't believe I didn't know about this! I'll actually make popcorn and sprinkle it with sugar! Can't WAIT!

You'll be pleased you did. If you only ever buy one DVD, this is it.

I think viewing it with you in the snazzy Los Feliz bar would have made an ideal sequal.

Hmmmm, filmcitic wants to be able to recut the sex scene!! Was there good footage that ended up on the editing room floor??!! ;-)

Don, thanks for the kind words.