Saturday, we went apartment hunting in Manhattan, that little island off the coast of New Jersey. It was a series of grotesque actions followed by a large EUREKA! Followed by a bad meal and a relinquishing.

First of all---why would someone show you an apartment for 2100 bucks a month that is on the first floor with views of nothing but garbage cans and in order to get into the kitchen, you have to suck yourself in, flat as a planaria, in order to slither past the suburban sized refrigerator sticking two and half feet into the doorway?

Then, why would someone bring you to an apartment that was already rented out?

Then, why would someone bring you to another apartment that you couldn’t get into?

Lastly, why would someone show you an apartment that is, truly, a tomb, that no Paxil lick, no matter how big enough, could ever bring you back to joyful life?

After all those, we looked at a huge place, with plenty of light, on way upper Broadway and 102 Street. Nice neighborhood. But strollers, like packs of wild coyotes, come at you with a ravenous lope that is almost impossible to second guess. We decided we had to take this apartment anyway, that we would never see anything like it that large again for the price offered. But after some serious thought, we thought, nope. Too far, too straight, too Who Cares?

So, we are technically not at all homeless, but it sort of feels that way.

It was good to get back to the easy-sage-and-pink of our Queens manse of 400 square feet.

Tune in tomorrow when you may here me say, “Are those mice from the lab next door?”
or “I love this bathroom, now stop with the gag and show me the real one.” Or, “Okay, all I need is 750K for this co-op and I can forever live like a college student but never again have to worry about my rent going up, just the maintenance fees?” And then perhaps, “If Los Angeles is so awful, why is everyone there so happy? Or is that only the cashiers at Tranny Rite-Aid?” 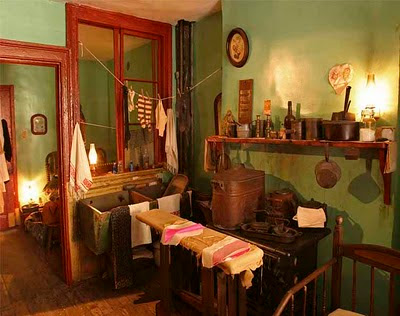 The Upper West Side is MY neighborhood and it is AMAZING and you will love living there. Of course you will take trains etc because everyone is downtown, but soon you will realize that it's nice to live in a neighborhood, not Silverlake or whatever, so you can be civilized. My pied a terre is 103 and Riverside, so we're neighbors. Congrats!!!