In an act of expedience, I put the New York Times review here:

But on a more personal note...we saw THE MUTILATED tonight, one of Tennessee Williams' late expressionist plays down at the New Ohio on way west Christopher street, starring Mink Stole and Penny Arcade in a great production, directed by Cosmin Chivu with original music by Jesse Selengut. Mink is our friend (that's what makes this personal) and she is spectacular as a woman with almost nothing but one whorey old pal whom she lost for a while over a falling out over whether or not to eat at a Chinese place.

Well, it's more than that. They fall out because they are completely not meant for each other. But in the end, what else do they have?

Penny Arcade, as Celeste, is queen of the tits. And Mink as Trinket, has lost one of hers to cancer. But they are both horrendously mutilated and in great need of care. They are both quite different actresses and each is greatly suited to her role. You believe what they are going through. You feel it. Celeste is the fun. Trinket is the money. That's what they have. That's what they play. For realsies.

The seedy bar, the original music by Jesse Selengut with a large cast singing the weird upbeat hymns in between scenes, the never-dull direction by Cosmin Chivu on an admirable set, designed by Anka Lupes, made of strip lights, neon and steel, a game supporting cast, all of it, makes for an original night of brave and raucous, smart and lyrical entertainment.

See it. It runs until the 1st of December. It ran in Provincetown this summer. Hope that it runs again in 2014.

It's good to see a play that is brave in every facet. And raw. And needy. And true. And funny. And sad. And strong.

And a little campy. But only a touch. 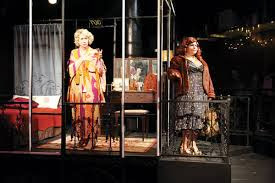