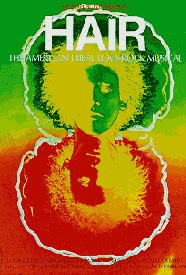 This afternoon, I got in my car which was parked near the hardscrabble intersection of Overland and the entrance ramp to the 10 Freeway. If you live in Los Angeles, you might recall this section of town as a place with many ramps, bridges, medians and weeds. In one of the medians was a man with a sign that read, “Vietnam Vet. Disabled. Just Hungry. Can you Help?” He limped. He was old. He continuously moved his jaw up and down as if he were chewing or something—the kind of action you see in an old Hitchcock movie when it wants to be made clear that “this old guy is sort of nuts and falling apart.”

I didn’t give him any money. I honestly only had twenties. However, I did have quarters. But I need those for parking. I felt bad for the guy, truly, but I did nothing to help him. Next, I had my privileged day and went to the theatre. Which woke me up.

We saw HAIR, the 40th anniversary production at the MET Theatre. HAIR is presented by the original Broadway producer, Michael Butler, a very affable guy whom we met in the very convenient $5 parking lot.

Guys, go see it. It’s fabulous. I have never seen the play before. Sure, I saw that Twyla Tharp movie of it (a few times) which was so 1979 does 1968. And I actually liked the movie. For the music. But the play is a much more enjoyable experience. The extremely loose nature of the narrative, the be-in philosophy, the fun sketchy bits, the lovely celebration of life, light, color and flesh really do work on your senses and your soul that by the end, when they drag the audience up onstage to clap to LET THE SUNSHINE IN, you are not only happy to go, you are pretty much in love with everyone in the room.

Of course, Galt MacDermot’s music is still the big star here. My favorite songs, both in composition and execution, were Ain’t Got No, Frank Mills, Black Boys/White Boys, Walking in Space & What a Piece of Work is Man. These, of course, are not the greatest hits, but that’s usual for my taste. Singing talent varies some, but it’s really not much of a problem. There are some standout singers. When you go, you can hear them for yourself.

The cast is gorgeous, talented, honest, generous, extremely present and filled with some kind of special love. To be in their presence, even if they were to be doing nothing more than humming the phone book, is worth the price of admission.

I do not want to give short shrift to Ragni’s and Rado’s script. It is infused with the full awareness of some positive life force, a wonderment that is especially coursing in the blood during the coming-of-age season in life. The writers juxtapose this natural, positive energy against a society that is willing to take these beautiful young adults and have them killed. It is really quite shocking, an enormous tragedy and obviously relates to today’s situation in Iraq. By the time the sardonic What a Piece of Work is Man is sung, overlooking the mock carcasses of a recognizable sampling of different groups of people who have killed each other during the last few centuries, you realize, intellectually, this is where the whole story has led and it's like being hit with a plank. Then, emotionally, you feel completely saddened by the fragile, confused psyche of the human species and its ability to twist into the insane direction of fear, greed and thoughtless carnage. This play makes you want to make sure that not only do you remain conscious every second of your life, but that your life, in fact, needs to also be about awaking consciousness in others.

Do I have to mention again how great the music is?


Get your Wig Here

I was too young to see the play when it came out. I remember, in Peekskill, my Uncle Gene had the album and it was totally taboo and we were not allowed to listen to it.
Years later, I was Berger in a production of HAIR at Harvard (Tufts and Harvard shared hams) which I had to quit because, basically, it was a terrible production, completely rewritten in the worst way. Then, in the late eighties in New York City, I was offered the role of Berger in a German touring production---but just to take over for a few weeks so the real Berger could have a Christmas break. I didn’t take the gig because my ego was bruised, being offered nothing more than a mere replacement jaunt. I did meet Ragni and Rado, the creators, during the endless days of auditions. Old, fun, nutty Hippies. Hard to tell exactly who was gay between them. The audition process was much like the play—sort of wild and without boundaries and I was put off by it. I didn’t get it exactly. I was never meant to be in HAIR, I guess. But often, I sit at the piano and pound out Easy to Be Hard or Walking in Space.

www.HAIRTIX.com
Posted by Don Cummings at 1:32 AM

So how do we elect leaders who are conscious? The whole rush to the "Harvard"-trained, high achieving people who paste on their faces is what's getting us into all this trouble. Mother/Judith